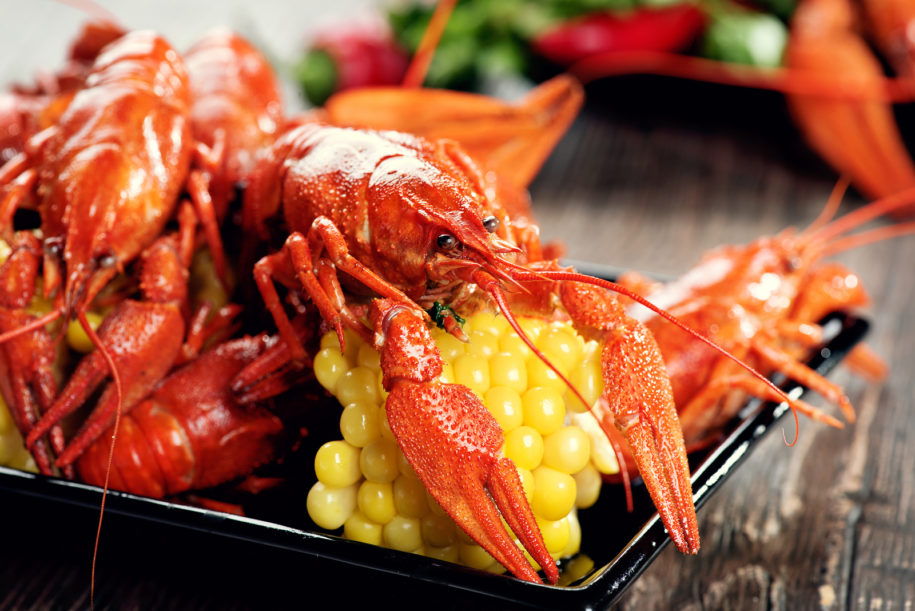 Whether you call them crawfish, mudbugs or crawdaddies, these small freshwater shellfish are part of a Louisiana tradition that has been binding families and communities for generations. Once Louisianans get past the brief cool spell they know as winter, they love nothing more than to get outdoors to cook, play music and celebrate well, you name it and they want to celebrate it—family, friends, good fortune, the list goes on. It’s part of the charm. But there’s nothing like celebrating with a traditional Louisiana crawfish boil.

Though crawfish were once highly underappreciated and even disparaged, people in recent decades started to realize how awesome they were, especially when boiled in a pot with lots of delicious stuff. That discovery in itself was plenty of reason to celebrate, and celebrate they do.

In this article, we’ll take a little skip through crawfish history, how boils started, what exactly goes into a crawfish boil, and most importantly, how to make your backyard boil the talk of the neighborhood.

A brief history of crawfish in Louisiana 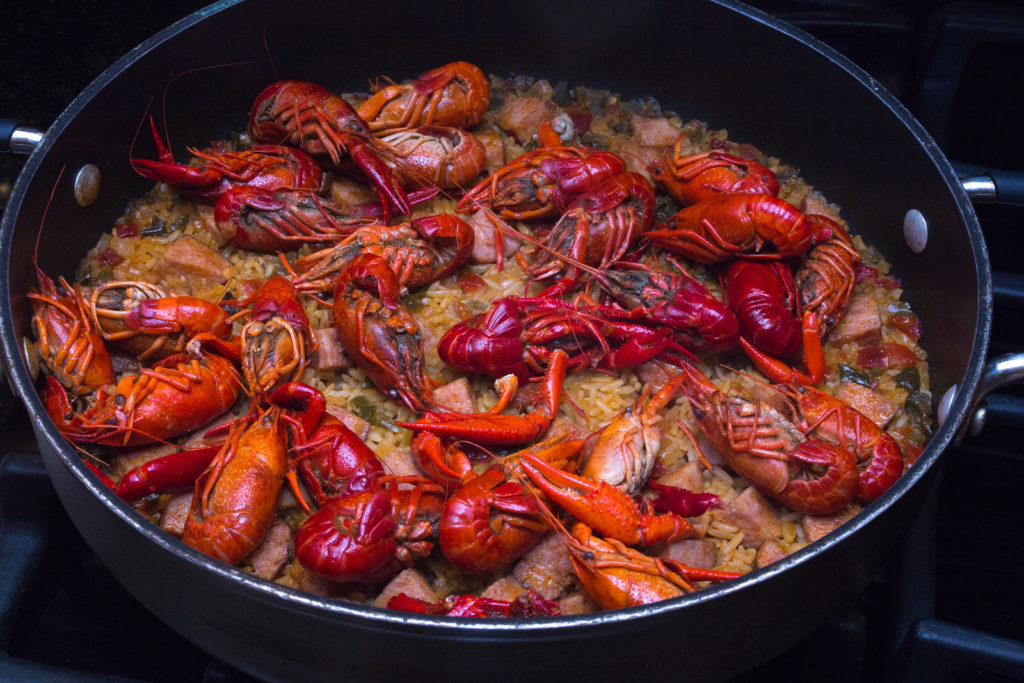 These small crustaceans are often linked to Louisiana’s Cajun people, descendants of French pioneers who had crossed the ocean and settled in Nova Scotia. In the mid-1700s, the British came along and told them to scram, so they headed south to warmer waters (which, if you’ve ever experienced a far Northeast winter, you’d know was probably a really smart move on their part). Legend has it that they missed the delicious north east coast lobsters they were eating so much that they spared no trouble looking for more. But the farther south they went, the smaller the lobsters were. By the time they got to the bayous of Louisiana, the “lobsters” were quite tiny. But tiny lobsters were better than no lobsters at all, and they were pretty tender so all in all not such a bad deal. So, there was nothing left to do but throw them in a boiling pot and celebrate ditching -35 degree winter temperatures while basking in the warm almost-tropical climate.

The Cajuns (called Acadians back then) can’t take all the credit for crawfish, though. They weren’t the first to discover crawfish nor were they the first to think of cooking and eating them (though they may have invented a pretty killer spice blend to put on them).  Long before the Acadians made their permanent snowbird journey south, the native tribes in the area were catching the mini crustaceans by  luring them with venison on the end of reeds or sticks.It might seem like a primitive method compared to today’s crawfish traps, but the locals knew what they were doing and hauled the crawfish in by the bushels. It’s probable that the Cajuns/Acadians learned about crawfish and how to catch them from the Native Americans.

Though there was an abundance, crawfish weren’t always the super fun and popular food they are now. Sure, before the Civil War days the rich and fancy loved to eat them in gumbos or bisques, but they came to generally be viewed as a “poor man’s food”. Many times, they were only eaten after a flood, when the poor little buggers became stranded on land and since they were there and easy pickins’ at that, people figured they might as well make a meal of them. For some, crawfish was good for nothing more than fishing bait.

How did crawfish boils get their start? 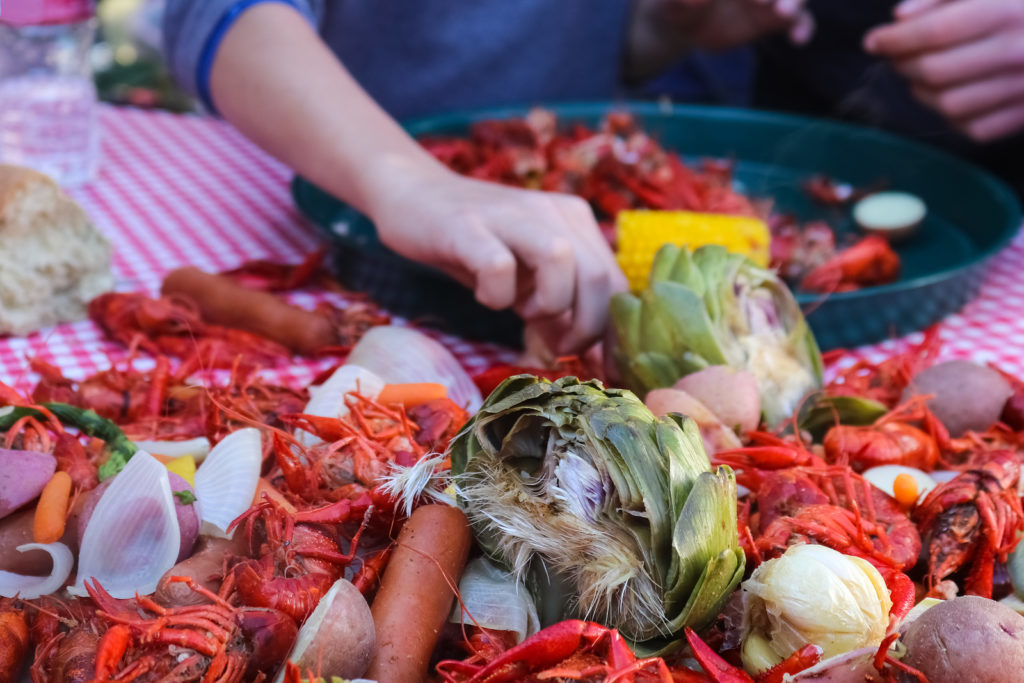 Even up until the 1960s, crawfish had a bad rap and they couldn’t shake their stigma as a low-brow cuisine. They needed some serious PR to make over their image. This came in the form of the first crawfish festival held in Breaux Bridge, LA, the then newly minted crawfish capital of the world. The festival worked wonders for introducing crawfish as something truly great for everyone, rich and poor. With that, crawfish cuisine was on its way to being the hot new food rage across Louisiana. Restaurants started to include crawfish dishes (traditionally Cajun and newly invented) to their menus and everyone literally ate it up. It also helped increase crawfish sales, and prices per pound quintupled (well from $.5/lb to $.25/lb in the 1960s). In 1983, the crawfish earned the honor of becoming Louisiana’s official state crustacean (an official designation that was invented to give crawfish it’s due recognition as an official part of the state culture), giving everyone all the more reason to celebrate it with parties.

What goes into a crawfish boil? 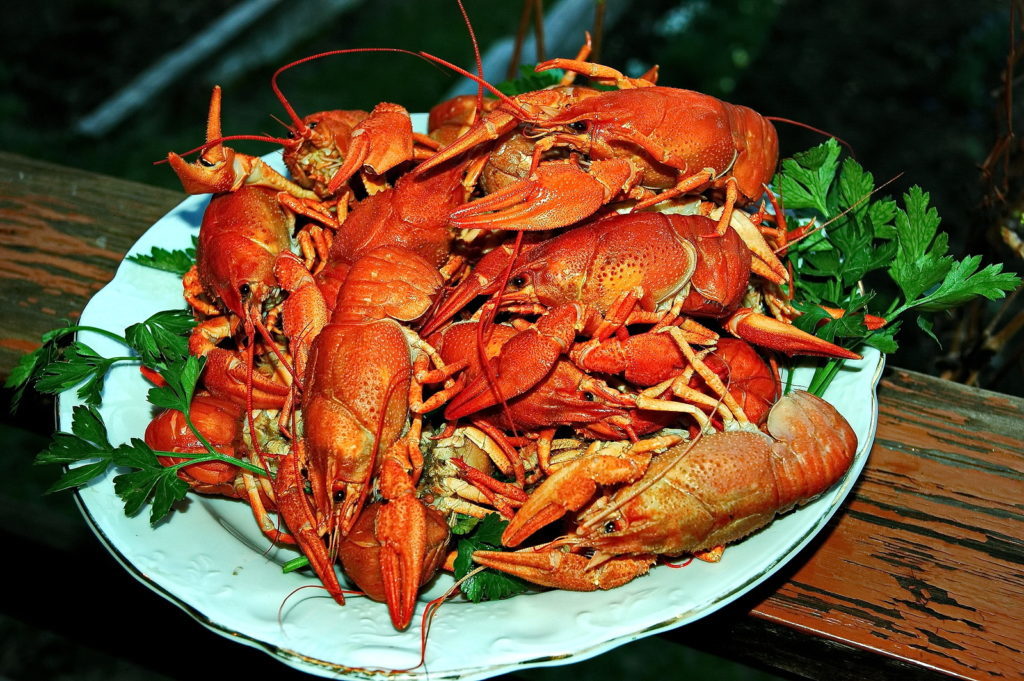 That is a great question, and we’ll dedicate this section as your crawfish boil mini how-to guide. When having a crawfish boil (often thrown as a backyard party), hosts shouldn’t be shy with the amount of crawfish provided. Depending on the number of guests, you’ll need a sack with around 40 lbs to 60 lbs of crawfish (maybe more). Once they are brought to the boil location, most people dump them into a bin or cooler filled with ice, water, and salt which helps to de-mud the mudbugs.

While the crawfish are getting their bath, a large stockpot is filled with water to boil. Cajun seasonings (some use seasoning packets) and herbs like thyme, marjoram, and bay leaves are added. There’s really no set crawfish boil recipe per se, so no hard and fast rule about what goes in next. It may vary by chef’s preferences, but there is almost always corn on the cob (cut in half), onions, garlic (whole bulbs). You might also find lemon halves, potatoes, mushrooms, and sausage in the pot.

Once the water is boiling, it’s time to dip the crawfish. They are usually put in a mesh metal basket and then lowered into the water for about 10 minutes. You’ll know the crawfish are done when they start to sink to the bottom of the pot.

If you want to go the authentic and traditional route for serving the pot contents once they are done, newspaper is laid out on the table and everything is dumped out on top. If you’re not feeling the newspaper, plastic tablecloths from the party store are also an easy option.

Since this is an informal type of affair, there’s no formal serving going on, everyone just grabs what they’d like, and the feasting begins. The joyful messiness of it all is a large part of the fun.

Though this is a feast all in one pot, there is no crime against serving side dishes. Homemade cornbread is an excellent complement to the pot contents and a fresh salad can keep things cool on a hot day. And of course, you’ll never go wrong with having some refreshing summer watermelon slices to sweeten the deal. 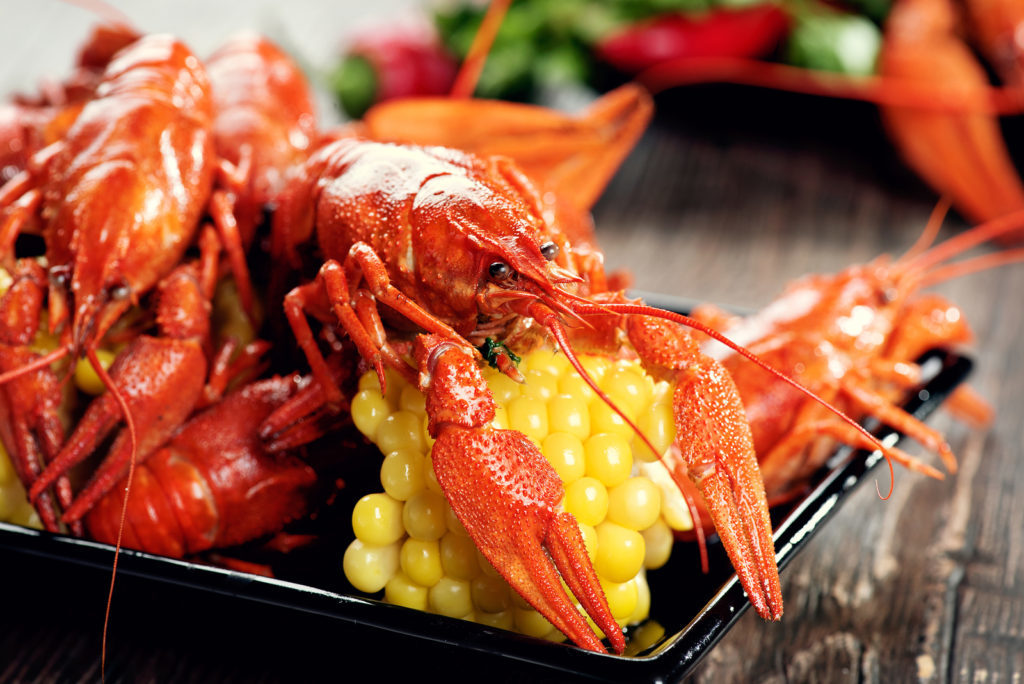 Although the crawfish are being sacrificed for the good of the boil, a true Louisiana style crawfish boil is anything but a funeral (which even in New Orleans can be a raucous party). If you’re in Louisiana or just love their style, you know that this is a party, darn it, and one thing Louisianans know is how to party. You probably get the basics by now, but we all know that the devil is in the details. Here are some added tips for throwing a truly terrific crawfish boil.

Now you that you’ve had a glimpse of the history, the basics, and the extras of throwing a crawfish boil, it’s time to celebrate this fun and fascinating piece of Louisiana culture by hosting your own. Bon apetit! 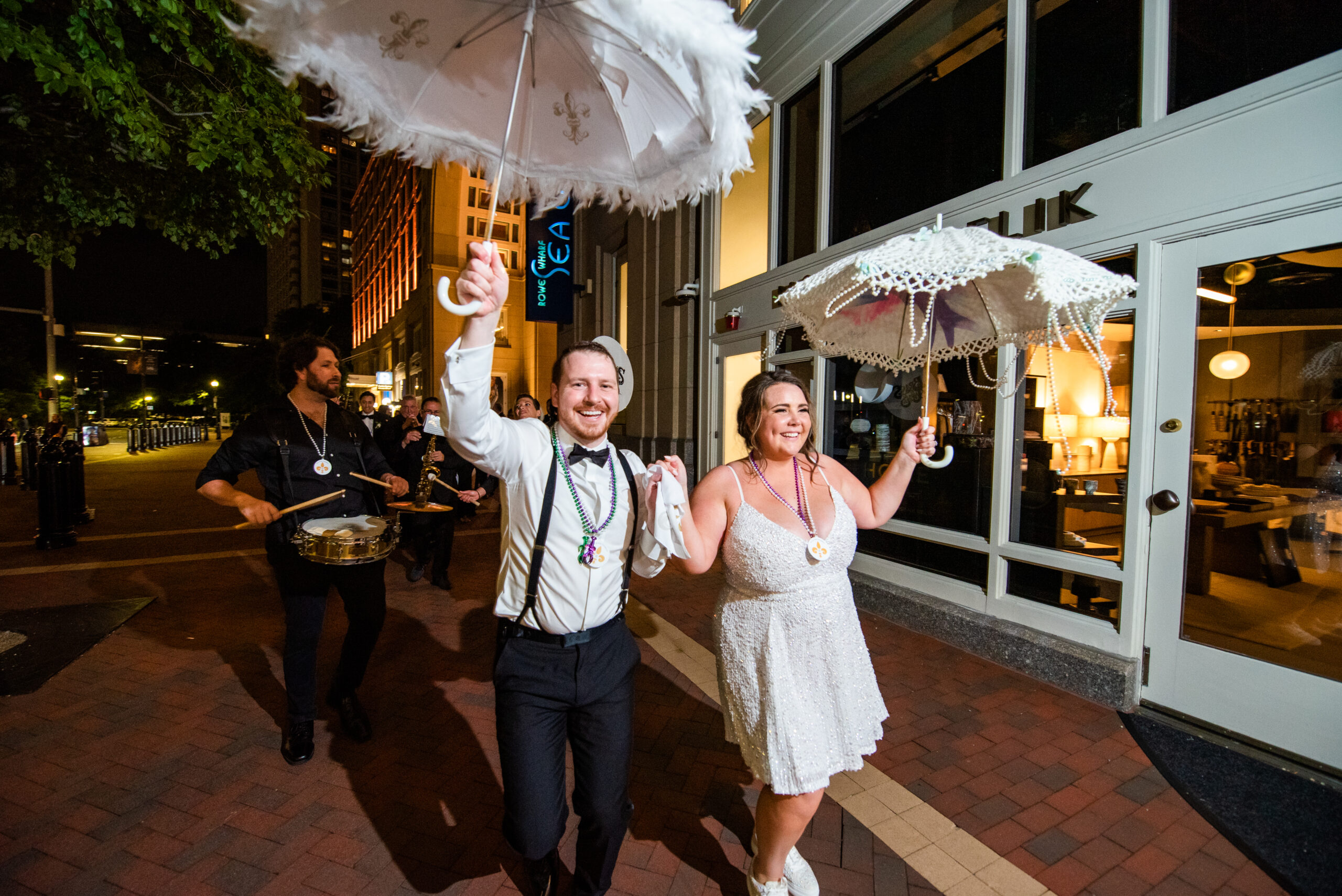 Book Our Wedding Reception Brass Band for a Memorable Night

DJs and cover bands are a dime a dozen—everyone’s been there and done that. It’s always the same old music and obnoxious emceeing. You want your... Read More 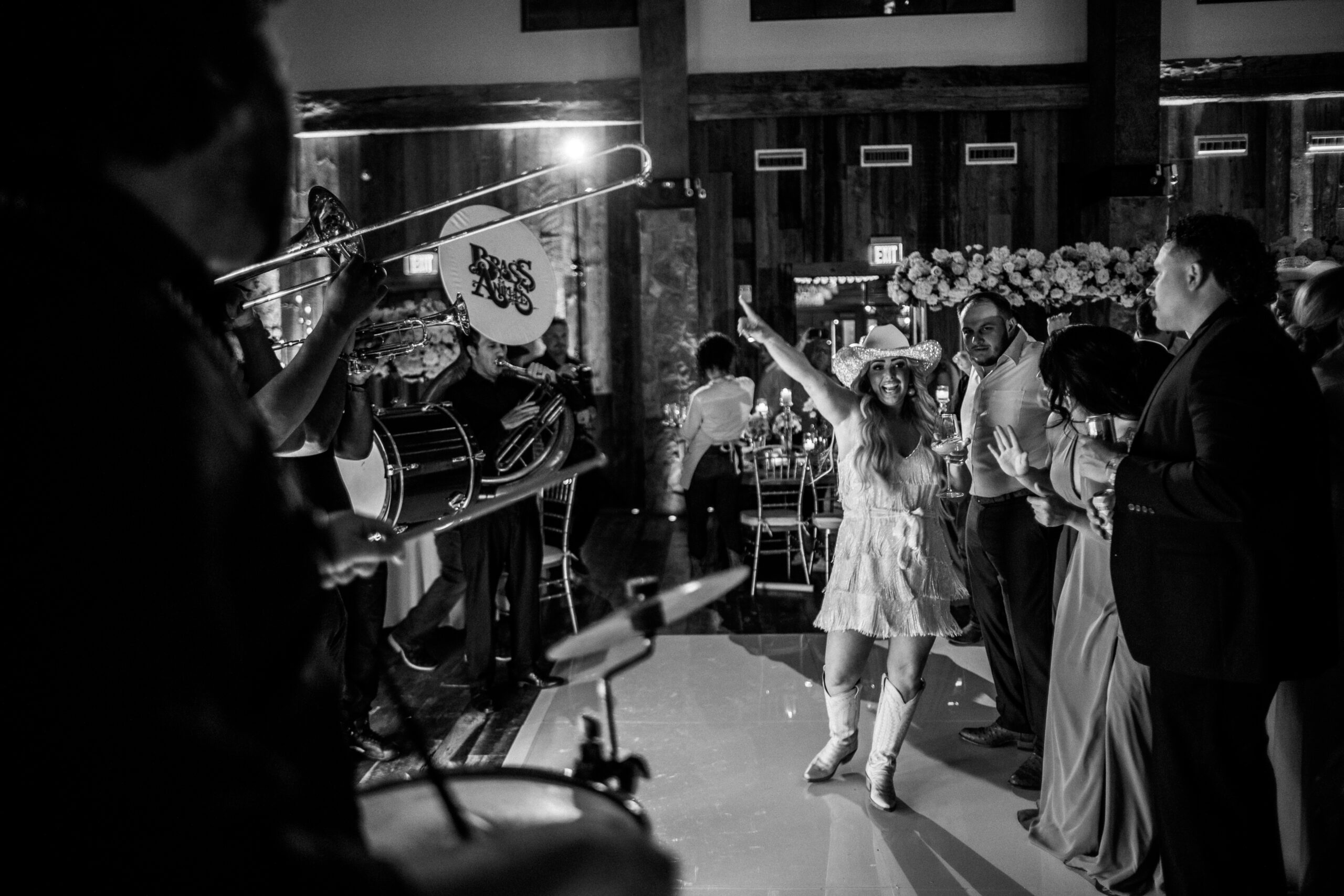 All your favorite family and friends have just flown or driven in to start the festivities for your wedding day with the rehearsal dinner. It's tough ... Read More 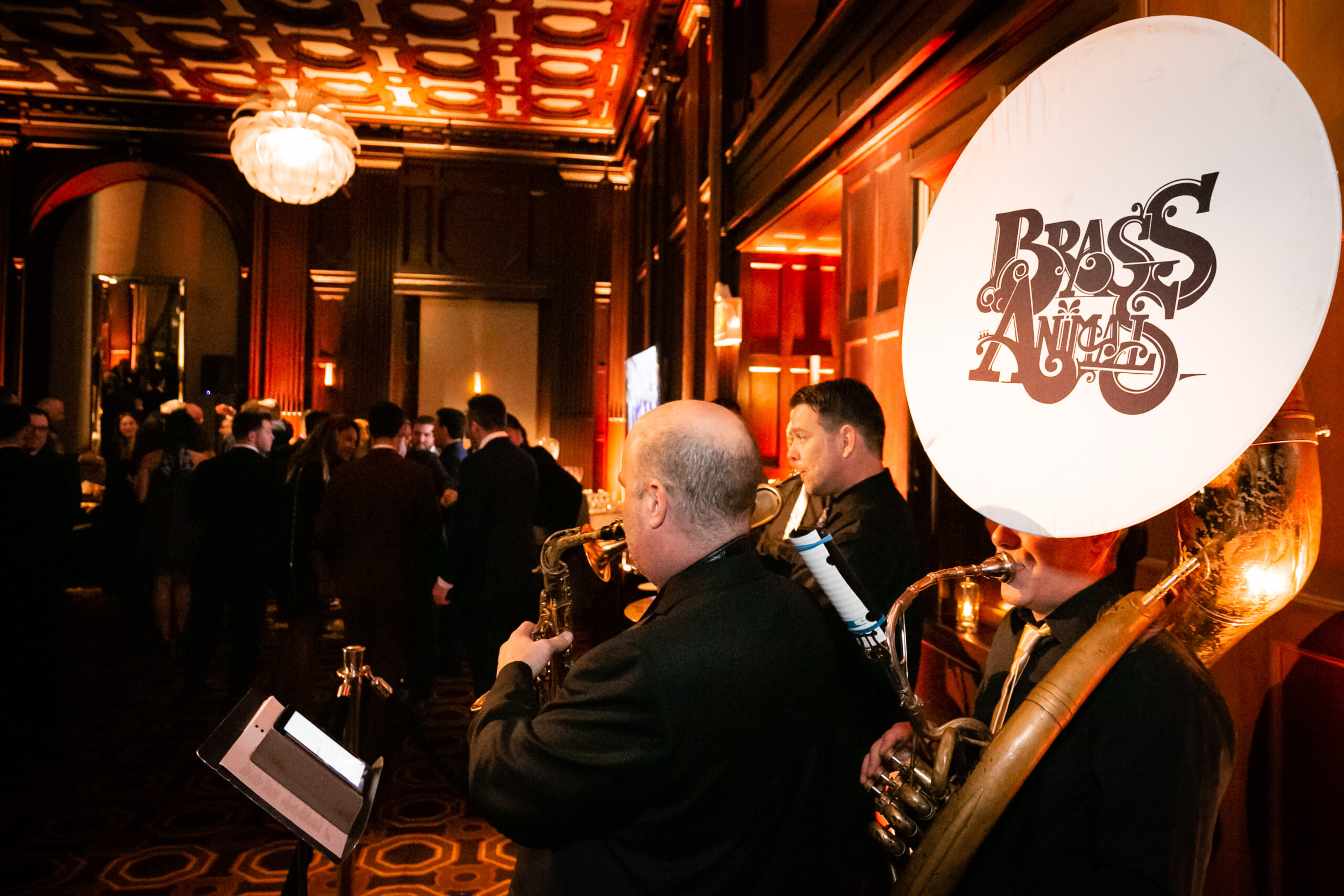 Bring Your Next Houston Event to Life with a Jazz Band

Houston is a city with a lot of character. From the oil industry and its towering skyscrapers to the world-renowned medical center and all the vibrant... Read More