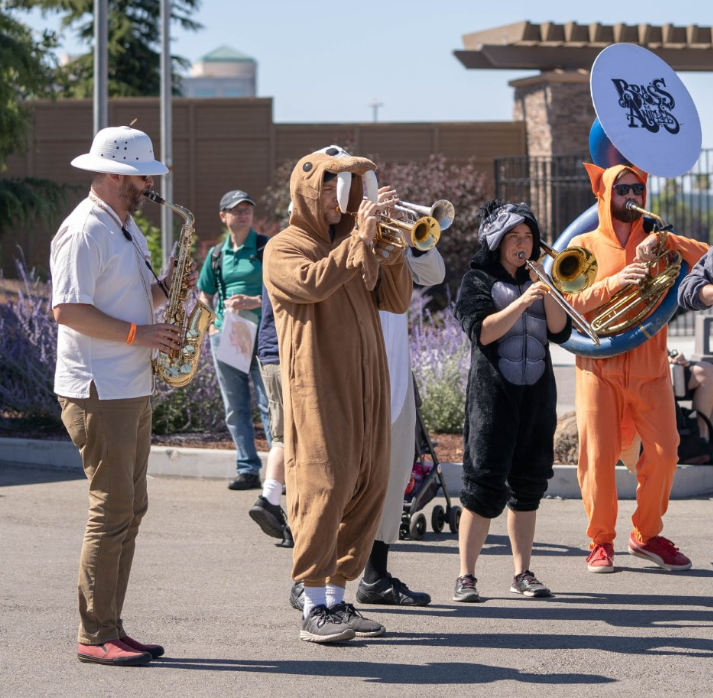 Oh, the eternal party planning struggle—do you go with conventional DJ or do you take a gamble on a live band. A DJ may seem like the safe route to go when it comes to choosing a musical host for your event, after all, aren’t there more variables and chances for a total music fail when choosing a live band?

A live band can bring the right vibe

What kind of vibe do you want your party to have? Music is pretty important for setting the tone for your event. You might have a specific theme going (Mardi Gras, holiday party, wedding, etc.), certain genres that you and your guests love to sing and dance to, you might want a style of music that reminds you of certain times in your life (like bringing you back to your high school or college years), or you might want a mellow or even romantic tone set by your music selection.

DJs and live bands will bring different vibes to the table (or dance floor). Ask yourself: “Which one will be able to capture the spirit of what I’m going for?” “Do they have enough music in the genre I want to hear to play or spin for several hours (or however long you want)?” These are just a couple of factors to consider, but there is so much more.

Vibe and atmosphere aren’t only about the playlist. Style of music, song selection, noise level, etc. are important factors, but the way the music is played also has a big effect on the mood.

The difference between a live band and a DJ is the difference between listening to a song on the radio and listening to it at the front row of a concert. We don’t care who you are, it’s hard not to be excited by a live performance. Even the most hard-and-fast wallflowers will find themselves tapping their feet or humming along to the music of a live band. Older ones who can’t get on the dance floor will also appreciate a live performance to keep them entertained if they can’t cut that proverbial rug anymore.

That human element along with live instruments makes for a dynamic presence in the venue. Live music gets a crowd excited because it is soul-stirring, emotional, dramatic, and motivational. Do you remember the last time a DJ made you and your guests feel that way?

Each band has a unique personality, a composite of all the characters within it. Don’t discount the entertainment value of a trumpet player who is totally rocking his solo like no one is watching.

Part of what makes the human element so important when it comes to a memorable music presence is that people can be interactive. A DJ speaks from his booth and may even call out to the crowd to sing or shout various phrases and guests love doing it. It makes people feel that they are an integral part of the party.

On the other hand, DJs usually aren’t any more interactive than that—they are somewhat limited. A good band leader, however, not only knows how to emcee, he knows how to interact with guests. Unlike a digital music player, he knows how to connect to the people around him and keep guest engaged.

More than that, a live band can be mobile, adding a fun, special element to the event. DJ is separated from guests behind his equipment which can create a small barrier physically and mentally for the crowd. A band can get up to walk and play among guests, making them part of the experience.

DJs have a pretty vast and eclectic repertoire of music,  but they can only play whatever music they can buy or download. They lack a certain amount of flexibility and spontaneity in a performance that only real live humans are capable of.

Many might make the argument that a live band is limited in the music they can play. But those who make that argument probably never heard an amazing, very professional live band play (much different from the garage band playing Springsteen covers at the local bar)(not that there’s anything wrong with Springsteen, we love The Boss as much as anyone else).

Some people want to hear the songs they love exactly as they were recorded and that’s great! A DJ is perfect for that—giving people the sounds of their favorite artists as they were meant to be. Many DJs can even create exciting mixes, letting their creativity shine in that way.

If you want to hear creative musical twists on new and old favorites or expertly mixed genres and styles (think Beyoncé songs played by a brass band), a live band is the way to go. Many musicians love to get creative with their compositions and give guests sounds that are unique and may not be heard anywhere else.

Live musicians also have to ability to improvise and bring spontaneity to the set (for example, the rockin’ solos previously mentioned). Their ability to read a crowd makes them adaptable to the personality of the party. This usually makes them better at transitioning from one song to the next and keeping everyone engaged. Ever heard a DJ who starts one awesome song after another, getting you in the groove only to switch each one out 30 seconds into it, completely wrecking the flow? Yup, good transitioning is important.

What if you are having an event that requires a mellower sound? Some might fear that a live band will be too loud, too in-your-face, or can’t bring a sound that is appropriate to the event. Is that always the case? Are live bands not an appropriate musical choice for quieter affairs?

Professional musicians know how to balance sound. DJs seem to only have one volume and it can be nearly impossible to carry on a conversation above it (why is the whole office hoarse the next day? Maybe it was the 4 hours of screaming about their last vacations or their kid’s accomplishments to each other?) A live band filled with professional musicians will be better able to tailor the volume, tempo, and tone of the music to suit the needs of the host. They can provide light background music—often with vocals or just instrumental to keep the level sound just right for dinner or conversation.

Addressing other concerns about live bands

The argument could be made that a DJ usually takes up less real estate in a venue. While it’s true that a huge, 20-piece ensemble might not be practical for a party in your basement or sorority house living room, a venue that has space for a DJ has that same amount of space for a band. A DJ still needs room for his equipment and speakers (something a live band doesn’t need) which means they take up a bit of area.

Sometimes with a DJ, electrical outlets can be an issue. There may be space in a venue for a DJ to set up, but no place to conveniently plug in their equipment. A live band is man (or woman) powered—they don’t need outlets, they bring the electricity to a room.

Another concern that many event-throwers face is budget. DJs can cost less, which is very appealing if you’re working with limited funds. However, DJs don’t always cost less, and often they are still quite an expense. It’s good to do a price comparison and check out any specials a live band might offer (are they cheaper on certain days or at certain times of the year?).

Worried about musical variety or potential lack-thereof with a live band? DJs do usually have a large selection of songs in their bag of tricks—they wouldn’t be a very good DJ otherwise. Likewise, a professional live band wouldn’t be very good if it didn’t have a wide range of songs to play either.

If you hire a genre-specific band like a salsa or polka band, chances are you won’t see much variety in the musical selection, but many professional bands like to mix things up. Like a DJ, their job is music, so the best bands are going to be constantly adding songs to their repertoire to give clients a great, variety-filled performance.

A DJ with plenty of personality can get a crowd going, that much is true. But you have just as much risk of getting a DJ who will leave your guests snoring and your dance floor boring. Or maybe even worse, obnoxious and cheesy. And then you have the rage-inducing request-takers who hijack your party by playing everyone else’s tunes, (For goodness sake, who is requesting the Electric Slide for the 9 millionth time?) even when they are on your firm Do Not Play list. All are prime ingredients in a party-killing cocktail.

No one wants to spend precious time and hard-earned money on an event that most people will hardly remember or is indistinguishable from any other party or event they’ve ever been to. A live band will give your event or party that “wow” factor, and can even add a touch of class if that’s what you are going for. Live music will give your guests something they can talk about.

About The Brass Animals

The Brass Animals, have delighted audiences of all shapes and sizes at corporate events, weddings, private and special events, and sporting events all over the country. Our sound fuses the popular New Orleans-style brass band style with an eclectic blend of hip-hop, R&B, funk and pop. Typical performances include explosive renditions of recent favorites by artists like Beyoncé, Bruno Mars, Snoop Dogg, Kanye West, and Pitbull, as well as our own spin on vintage classics by Louis Armstrong, Stevie Wonder, Marvin Gaye, Herbie Hancock, The Meters and more.

We’ve worked with the established companies and organizations like the Oakland Raiders, Google, Jack Daniels, Salesforce, the San Jose Earthquakes, Buffalo Bills, Facebook, Genentech, and Marriott International. We’ve also performed for many engaged couples and newlyweds and have been recognized as a 2018 & 2019 Couples Choice Award Winner by WeddingWire. Contact us today for a quote or watch us perform some of our favorite songs here.

Book the Brass Animals for your next event